Published January 21, 2016
Welcome to the page where I help educate you with when it comes to Farming Bases.  Most of what I am going to describe in this page is just a break down on what the variables of when it comes to base designs for farm bases, and what to truly look for when you are finding a base that suits you.  Wonder why there are people who love Labyrinth Base, but then all of a sudden there are those that complain that it won't work?  Wondering why people show Logs of a base, but some people don't bother with Logs? Most of what being describe here addresses the problems and issues for when it comes to these information.

This page won't be talking too much about Trophy gains or loses as this is purely for Farming and all about that resource.  This information mostly applies towards TH8 and TH9 Farm Bases (still can apply to TH7 but they can't really push too far and TH10 is inherently strong).  Since the fact that Town Hall shield no longer exists, more and more farm armies are actually armies and almost no more tier-1 farm armies. Since the fact that Town Hall shielding no longer exists, people are coming in with more expensive armies therefore they will HAVE to find a profit in attacking your base.  There are smart attacks and there is the general attackers/mediocre attackers.  No attacker will attack a base if they aren't going to get at least 3/8 of your storages or your DE.

I'm going to address a certain few issues when it comes to things such as Logs, and why people are complaining "it doesn't work", as well as feature the first of my Farm Base Talk.  I'm going to critic and show off some forum bases, and address them solo-ly based on how the base themselves work, and I will not put any personal judgement and biases towards these bases.

The Variables of a Farm Base

What Logs Are Telling and Not Telling; What to Look For

When it comes to logs of a Farming base, there are deeper things that are more important than the numbers beside the gold,elixir, and DE lost.  Too many people have judged a base solo-ly on the numbers lost or didn't lose, but the images themselves have even more meaning than that.

Now when you look at the Logs of the Farm base, you would see "wow, impressive at defending against __________", but when it comes to actual logs of a base, there are things that aren't being shown and things that are being shown, but aren't being expressed properly. Looking at the logs, you have to look at which of the Logs that the creator has picked, but if you want a good base, dig deeper and look at the logs which didn't get picked and take in the information on the bad longs.   There was someone in the forums which responded "Logs don't mean anything, if you are only showing the good ones, but ignoring people who post your base getting wrecked."  This quote has it's merits because it's half-true, logs don't show enough, because people are looking at the WRONG things.

If you look at the logs solo-ly on the numbers, that's just basic understand.  But if you now look at the logs based on my Farming Base Variables, you can uncover so much more information.  What you need to focus on is the Attractibility of the Farm Base (which Labyrinths are suppose to be good at), and Defendability of a Base.  Here are some examples of how to properly pull out the right information. 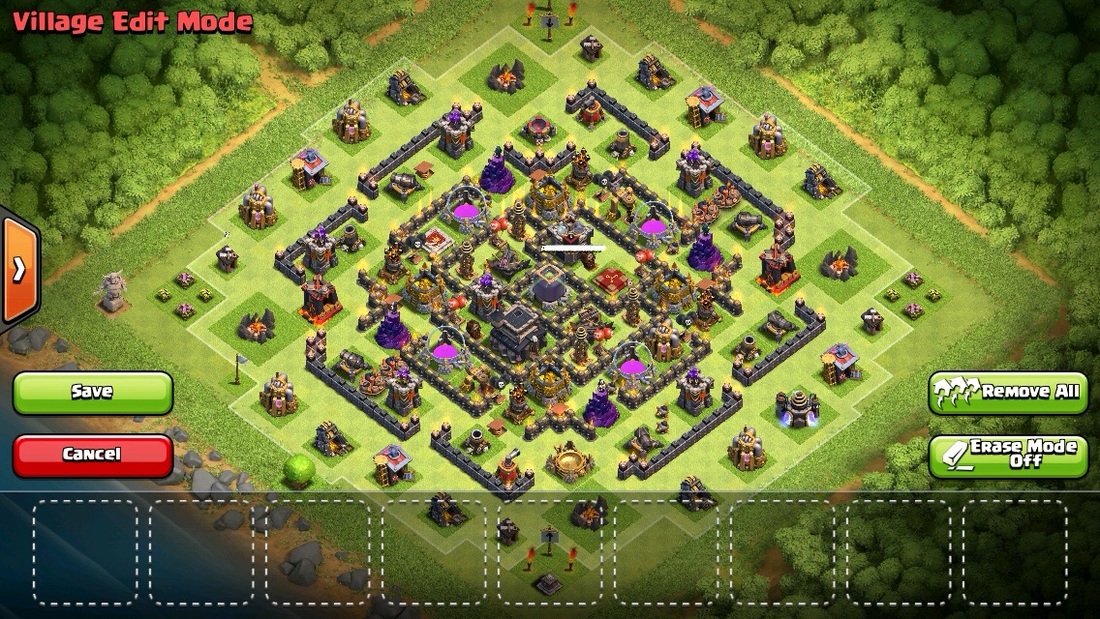 This is just a Teaser for the actual Farm Base Talk on Arcanum, please check the [Farm Base Talk Series] section for the actual analysis on Arcanum.
Farming Variable Ratings:
Purpose/Resource Ratio LoseAttractability:Defendability:Ideal Trophy Range:Town Hall Access:DE Access:
Comments:  For this base, it is set up to take out alot of ground bases troops, as well as makingit difficult to penetrate to the core.  It's an all around defense Labyrinth base, which makes it difficult to take all of the resource buildings even with a full army.
​
Recommended Usage:  Would recommend those that want to have a nice balanced base to defend against hard hitting attackers to use this base if you don't mind a few sacrificial storages.  Against Mid to Low Tier Farming Compositions, the DE will have no problem being protected, as so will half of the storages that will survive, and against Hi-Tier Full Army Compositions, they run a risk of not being able to have access to the DE. his base does a good job at balancing the DPS at core, so can be used at higher trophy ranges, but as a Labyrinth Base, not recommended for Master I and above.

Of course doing the base design analysis is important as if spring trap doesn't work majority of the time then what's the point. But looking at the logs is not the point of this thread, it's more towards the variables of this base. Which like you said if more logs aren't published, just take what is published by the creator and dig deeper yourself in the pages to see any other negative feed back of what other people have shown.

Also of course it boils down to skill level of the attacker once it's executed, but that's just part of it's mechanics as an actual base; BUT one thing that is SO hard and virtual impossible that no one that does farming base ever considered is the fact that how likely is their base going to be [Nexted], if you build a very strong Farm Base, you are most likely going to deter the weaker attackers, and get more stronger attackers. You can never really tell how many people [next] your base or what is the type of "lurking attackers" there are in the clouds.  You can only predict (through my Attractability method), and through guessing the Trophy range.

Which is why my theory here is to prove two points: Attractions, which is very much influenced by Trophy position, more higher trophies, more probability of hard-hitting troops, and how much of a sweet offer your base as a design is enticing to the general Mid-level attackers. Attraction accounts for the fact that if a base has features which mediocre attackers find "I should attack this" than "I should skip this" then that is important. For example Crow base has more higher chance of getting hit with Gi-barch compared to Arcanum in my observation due to the fact the base design at Arcanum's core is too intimidating (aka the Defensability at the core is too strong), deterring more-Gibarch users, which in results, allows more Gowipers to attack, while Crow has such a "I'm Opened!" feeling to it.

Also the fact that Defendability refers to the 'patterns of chance'. If for example you have a complete log of Arcanum at Masters II, and a complete log of Crow in Masters II as well, then the Purpose/Ratio of Resource lose will balance out and almost always show the same results. But as how I've shown Arcanum, the way I have described Arcanum's DE is the "hard vs hard", it's made with a mid-probability to get the core DE. But comparing it to Crow for example, it's made with the probability of not getting Core DE. There are extremes of course where there are flop/spam attackers that fail miserably and also really smart attackers that crush the base, but that is varies which Base Design has it's boundaries either not crossed at all so doesn't count, or the fact that that specific attack has more discipline. More probably of the bell curve is that you will find 80% mediocre attackers.

To repeat, Base design is important, I agree, but for farming the intimidation factor is a single silent factor as well. If you got an excellent base but no weak attackers attacking it, and you keep on getting hit by hard-hitters, then that lowers the effectiveness of it. If you have a base that is mid-strength, and attracts low-bies to attack you and don't get as much resources, that would also increase your effectiveness of the farm base. Real life result matter, even if you got the mechanics of the base right, the purpose is to attract the right crowds.


If Arcanum consistently gives out only (storages) [4],[4],[5+de], [3+de],[2],[6],[3],[4+de] for example, this early shows a pattern of the fact that the resource mostly given are at the average of maybe 3.5 to 4 storages. Making it so that overall you keep on saving half your resources each time, and DE is all about the Defensibility factor, which either you get unlucky and get it all taken, or you don't, you just don't know.

But if you put it up against a Fortress that only attracts strong attackers you might see a pattern of [1],[2],[8+de],[6+de],[1],[3],[4],[8+DE] which the creator can selectively show only the good defenses (such as the 1 storage lose, or the 2) since the fact the defendability of this base works, people will think that this base would be better than Arcanum. But if it attracts the wrong crowd half the time, then it's effectiveness might not be as big compared to Arcanum at all.
Powered by