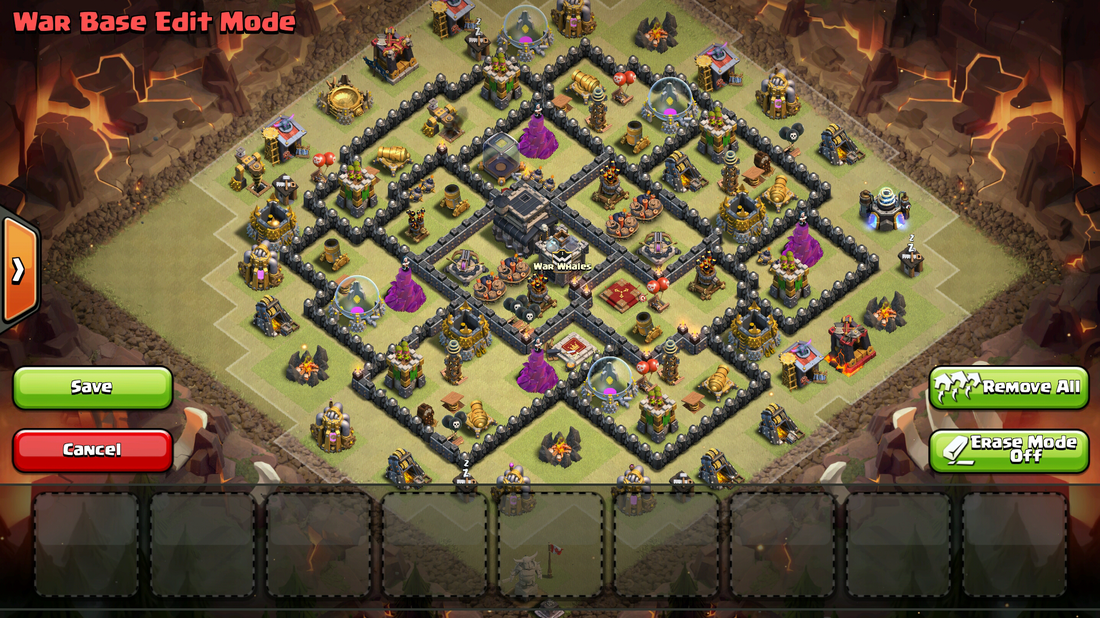 Pros:
-Same criterias covered by Metaki Series #1 (CC unlureable, Queen Kill protection, Holo protection, Storage locations, etc).
-three double giant bomb locations that the hog pathing will flow into (current ones, and the one where the mortar and AD are at the top).
-Town Hall is protected by 3 ADs
-Queen is sorta protected by the King as well as specific defense placements to make it harder to queen kill
-the multiple sections and compartments of the base makes it really tough to crack.
- Not 2 starrable by weaker attackers
- a better balance in creating a chaotic flow for the enemy attacker compared to Series #1


Cons:
-Alittle more holo-able
- Right side has 5 Defenses that can be gobbled by hogs (but it's protected abit by the Xbow so it's alittle better)
-Possible to Lure from the Left side Mortar, as we as the Archer Tower above that could go to the Wizard Tower
-Queen in the core can wreck this base alot if not taken out soon.

Fixes from previous version: (1.0)
-adjusted the storage locations to make the wizards side track more easily on the top left side (paired with the builders hut).
-readjusted the walls so that the inner side beside the dark elixir will make it harder to penetrate. 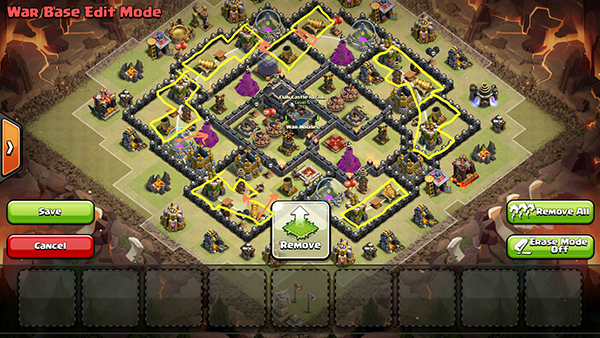 Orange indicate where the potential areas of Lures can come from, there are traps to stop them from advance though.

It follows the similar pattern as Metaki Series #1 where everything is parallel and paired together, making it harder to lure.  There is a spring trap between each pair to skim down the hogs even further. 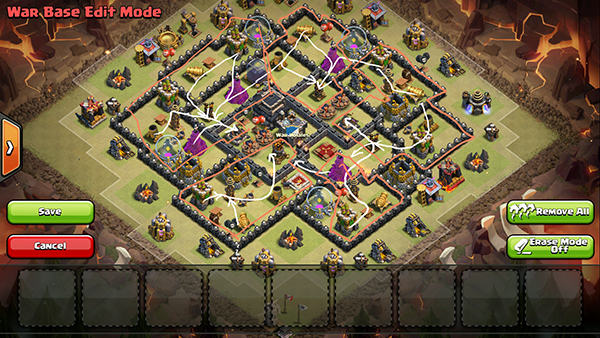 In this image you can see the white represents the 'hog pathing' of which hogs will follow as well as I highlighted with orange where the sections are when it comes to each section by section. As you can see the location of the double giant bomb literally gives a clear divide where the sections meet you as well as the fact that there is the bottom double giant bomb location that could be technically used. The good thing about this layout is that hogs will have to be going sideways, outwards, inwards, as well as far travel in order to reach other sections. 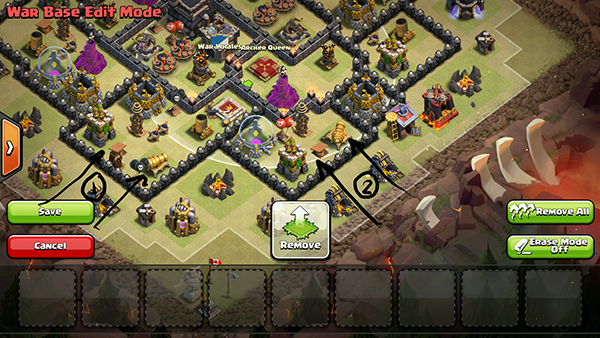 Pretty straight forward, there are two locations which base suit for the Queen Killing. No matter which one is picked they will be stuck within a section and be bombarded by outer defenses. The King is in position between both areas, as well as the fact that if you suspect they will most likely Queen Kill from the #2, then allocating the two Double Giant bombs in the section with the Queen before hand can really mess up the enemy's attack. Another good thing about the queen's location is that it's really deep within the section. The enemy must enter the base in order to damage her, but by the time they enter the base, they won't actually drag the queen into their sections, more like taking 2 steps away from her platform. A jump spell will be needed in order to beat the queen.