This is how a typical anti-3 star base would actually make their base.  Since the fact that now they got the Air Sweeper, they want it to be directly opposite side of the Queen Kill, as well as the fact that it would be used to ruin the 'tempo' of that circular motion of the typical Lavaloon attack and put seekings on the remaining two Air Defenses. The Problem with this though is it still only relies on that 1/3 zone of AS, and still has the same rhythm as before, but only a 'bump' to the equation.

But with this new exchange through this set up the enemy now has more control:
They gained insight where your Seekings are
They have more control over what direction your Air Sweeper is facing
It's possible to circumvent the Air Sweeper at the right angle.


All of these factors and information has been given to the enemy as you try to semi incorporate this building into your base.

How to Counter this Setup

Push against the Flow, Protect the Back 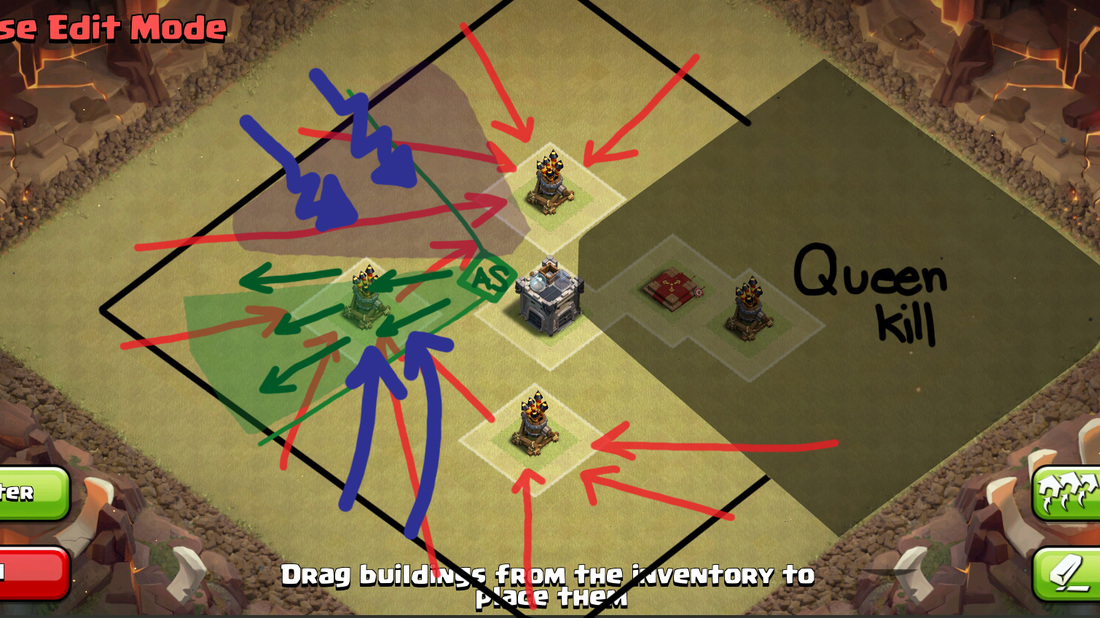 To maximize the Air Sweeper's air blast DO NOT centralize the focus of the AS, but instead, have it cover only 1/3 a side either the left or the right.

What is need to be done is to make it so that no matter which way, or where they come from, you can control of what direction the AS is facing and having the AS ONLY concentrate on the 1/3rd the side at a diagonal (to maximize the travel distance as well) would be more beneficial than it being straight on.  With the example you are making it diagonal, hard to reach, and pushes against the flow of the enemy's loons to the maximum.  Rather than the AS being an unsteady centralized that can wooble left or right, or be directly at the center while losing both sides, keeping the AS focused in one direction would be more beneficial.  You will be more in control of the direction of which the Air Sweeper is facing, rather than leaving it up to the enemy.

If it's straight on, you are just lacking the focus of the Air sweeper and the weakness of it's small coverage of only 1/3 it's radius to be taken advantage of. You are allowing (in boxing terms) them to hook from the left and hook from the right equally and they are in more of control of both sides (2/3s) which is more disadvantageous. If you make it at a slant defend only one (left) side though, at least if you know that the left side 1/3 is always shielded, and right side is exposed.

But with this set up now, you are in control of what is happening on the 1/3 section AND also the remaining 2/3 section. So in order to maximize the Air Sweeper's effectiveness, have the 2/3 section be able to protect itself (marked in purple). You are risking the right side of your base (purple zone) to be taken advantage of and if they went counter clockwise and then the AS would lose all meaning. but that is where other base building techniques such as asymmetrically skewering the base, protecting that 2/3 zone, deterring  them from coming from that angle would protect the AS.

Take control of your base, and control the flow AND the movement of your attacker.  Limit the options the attacker has, and anticipate any other weaknesses to your base with trap (not the buildings). This will be covered in another section.
Powered by