KARA Base Talk #1- Monica
Created By Dreamz, Analyzed by akiyume 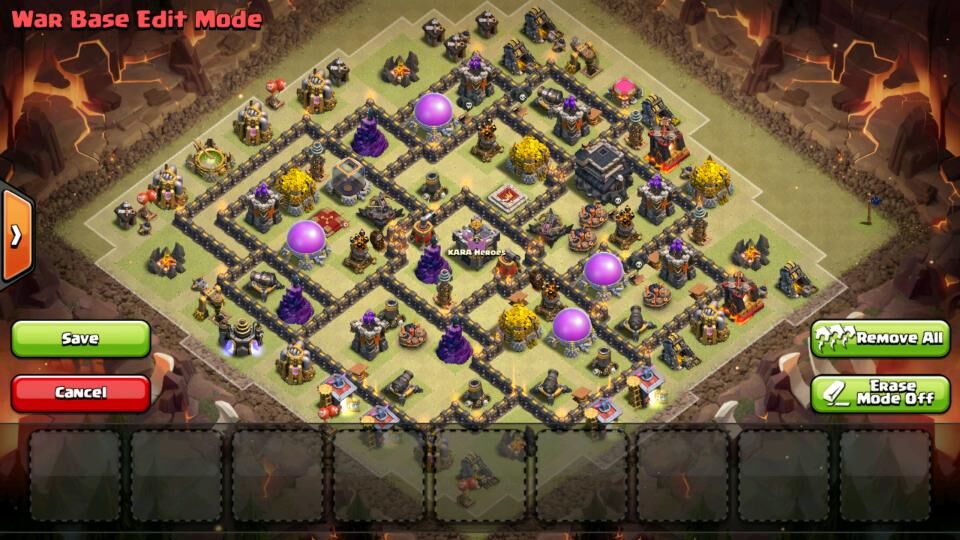 Published on November 24, 2015; Analyzed by akiyume
Welcome to the first ever Base Talk Series, specifically this is in the KARA Base Talk Series, using KARA Heroes bases to describe how the advancement of base design is at the top levels of base designing vs the Elites 3 Star Clans.  Most of the readers here have a general knowledge of Triton by TheJwhich does represent a level of 3 Star bases for the Elite War clans, but if you put it into today's standards, although it will pass the test against most 3 star clans, it won't be used in the meta games of today's standards even if it was a freshly made, unknown base. Now with this Base Talk Series, please learn from it and be able to absorb the amount of work and the levels of which those at the top have to bitterly attack and survive against the ever so strong wave of attacks.
Speedbuild by Ash/Eternal625

This base was created during the skirmish between Onehive and Kara Heroes.  It has some 'anti-first attack' features such as springs on the outside of the first defenses, and the high DPS Kill Zones with the Teslas located on the right side. The Main base qualities of this base is the usage of Storages on the right side to isolate both the left side and right side of the base, making it harder to Quad-Quake Hero, as well as the fact it incorporates diagonal giant bomb within the central area of the 3 Kill Zones.
​This base has a very well balanced planning as well as the fact that it employs it's very own unique 'diagonal double giant bomb' that CANNOT be dismantled by surgical hogs, a problem that most horizontal/vertical DGB face. This base for the top league is very well done, employs a mix of anti-first attacks, and heavy emphasis on DPS.

"Base Builder's Eyes - How to Analyze a Base" for Monica

This will be my first ever instance of using my newest guide, [Base Builder's Eyes - How to Analyze a War Base] which can be used for ever base created. Using it as a tool, I'll help you understand how to analyze a base and it's qualities.

1. What does the Base Target, and what are the Requirements?

2. Does the Base Follow the Current Ideas and Concepts?

3. Groups, Sections, and Territories. Examine the Base

4. Scenario Functioning: How the Base Would Respond to Different Attacks

​Before I say ANYTHING against this base, first look how well made the base is.  Now the fact is after the war against Onehive, (other than minor no-name wars)s, this base was retired from being used.  The fact that this base hasn't seen the light of public, and many more bases in other clans makes it lose alot of its potential to teach other people as well as the fact that it doesn't experience any attacks of lower levels, making it so that 'attack logs' for it doesn't exist other than it's intended target of Onehive. More information on [Base Designing's Vicious Cycle].

This base is well made and well addresses the meta games when it comes to attacking and defending, but not all bases can defend against everything.  This base (according to the facts I've gotten from KARA) survives two attacks (or just first attack then clean up) before getting 3 starred and the first defense against even the strongest attackers is what gives it a good quality.  I don't know what was the life span of this base, but for sure it's under a month of usage.   Put it out in the public, and it'll be good for 2 months minimum.  This

Another point which I want to point out is the fact that, although this base has been 3 starred, recorded, and everyone knows how it was three-starred, doesn't mean the same thing will happen to you if you mirror that same attack on it.  Timing, CC troops, Hero levels, defense level play a role in all the micro-actions which could make or break the base.  A base will still have the same weaknesses at certain areas, but it does not mean it'll be 3-starred every time it's been attacked the same time, just means it's more vulnerable being known and loses a few qualities.
Time Stamp of 9:00 is when the base gets attacked.

In this video it shows how it's been 3-starred, but also the fact that videos like these DO NOT show the initial attack which failed to 3 star this base at the beginning.  If a base was intended to defend against First Attackers, works, and then a Second Attacker beat it, which it gets recorded and shown, it does not mean the base is weak at all compared to other bases.  It just means that the quality and the 'target' which it intended to do cannot be shown through the front video.

This base survived it's first attack against Onehive, but did not survive the second attack against Onehive. Recognize the fact that this particular attack IS a second attack, so they know all the traps locations, and the teslas.  I don't have information on what the first attack was like, but I'll explain some key points which something like attack strategies do not explain when it comes to the positive aspect of this Base Design since it gets overshadowed by the attack.

This attack has a few things which put it to a disadvantage to this particular attack, as well as since this is a second attack:
Enemy knows what's in the CC
Enemy knows where the Teslas/Giant Bombs/Spring Traps are
Enemy has 25/25 Heroes

Please note, I do believe the fact that this particular attack was brilliantly executed so I am NOT 'hating' on the attack itself, but want to describe the 'possibilities' of the base design defending against an almost similar attack if it changed.
Timestamp: 9:38

Afterwards, at the North-west side, he places wizards and a jump spell onto that Wizard Tower, allowing the King to enter that area. The golem was dropped on the Wizard tower, and if the person brought wall breakers,, the Wizard Tower would be able to kill the WB as it tries to target that intersection. With this move, it was able to force the enemy to use a jump spell.
Timestamp 10:00

Now looking at this point, you can see that the enemy King has already locked on and killed the DefQueen.  At this point, you You'll notice the fact that enemy King is now in a location (with the golem) where there is 3 Storages, 1 Xbow, and 1 AD, HIGH Hp buildings.  If this King was a lower level King, the amount of time it would have spent in this 'area' would be until when the game would already end, coupled with the fact the King has this many high HP buildings and a wall to separate it from the remaining parts of the base.  A lv25 King cannot be underestimated as well as the fact that the sheer AMOUNT of barbarians that are summon get overlooked (and the amount of damage they do as a group is overwhelming high).  If you watch the replay, you'll notice how the barbarians were able to tear through the Lv9 Wall to chase after the Skele traps along side the King.  If the Skele traps didn't aggro the King/barbarians.  The King was able to leave this area early.

Now here is an important point of reference, and is the most brilliant play of the attacker which why the attack succeed.  Marked in orange, is the fact that the enemy dropped hogs on that LEFT SIDE of the base, as well as dropping a heal where that Wiz/Tesla/Wiz Bomb was located.  It helped kill the Archer Tower/AD/Xbow on the left more quicker and allowed the attacker to free the barbarian King.

Notice the fact that out of the enemy brought 21 Hogs, and used 13 of the hogs (2/3s ish) on the left side of the bases.  Remember the fact that diagonal giant bomb are rare and the fact that if this was a first attack, the enemy wouldn't know where the DGB are. and if there are two sets of DGB or not
Time Stamp: 10:15

How it actually went out, like I've said, a brilliant Hogs from the left side, entering in froo the left side and head straight upwards.  On the right side, the attacker did the "sacrificial hogs" like what Jake said, where it went straight after the Double giant bombs. They knew the fact that there wasn't a set of double giant bomb on the left side at all and was able to attack it using this attack strategy which worked.  In the replay, the King was able to break free from the left side, and join the north hogs as they go north to kill the remaining defenses.
In the end though, the second attack was well executed, with strong heroes to be able to execute this strategy, but not alot of people are able to pull this strategy off a second time without the right conditions. This base can still re-work the DGB locations into two sets and it could still possibly work.  Reiterate what I said earlier, the attack is well though out, had the right resources and insight as well as known the right ways to deploy against the base which made this second attack, work against this base.
Powered by