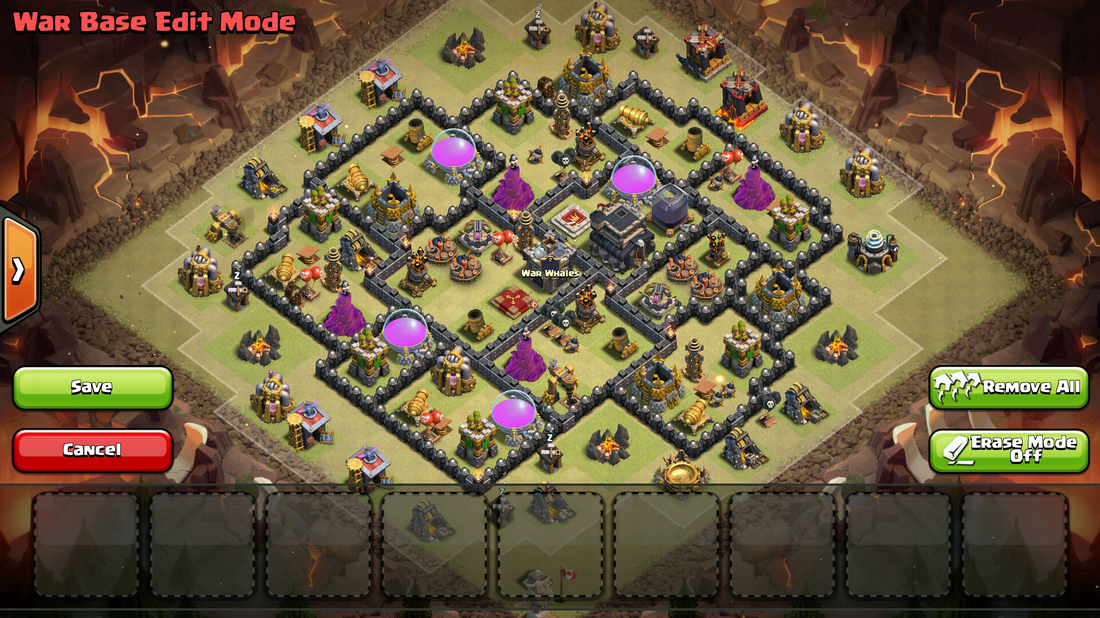 Cons:
- Base has a possibility to be 2 starred more easily.
- Still possible to take out the Queen and an AD when aiming for a Queen Kill
- possibly weak against Lavaloon
-
Fixes from previous version: (1.0)
-Tesla and trap adjustments (previous version still works) 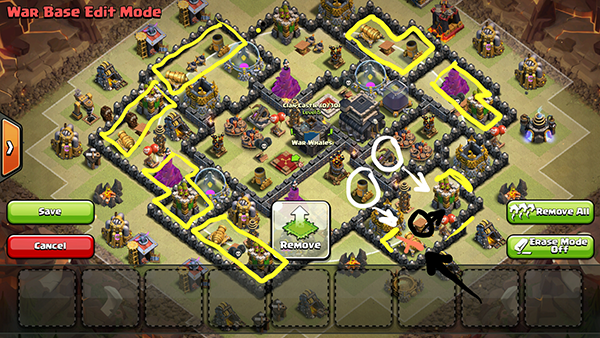 If you look at this image, you can see that almost each and every defense is paired with a paralleled tower. When it comes to CC luring, usually it's always 5 hogs or loons (with a hint of hogs). But if you look at this image, you can see that the defense protect the perimeter of the CC radius. Hogs and Loon pathing always go towards the closes defense and they can't afford long travel times that's why placing traps in front of it, and making it so they have to waste a lot of troop space and compacity but they still have to out survive their troops from going sideways. If you include the fact that there are many archers within the clan castle, this has already served the purpose of making it unlurable since even if they managed to break the twin defenses, they still need to survive long enough within the cc radius, which frankly isn't possible unless there is a lot of troops.
Also the fact that some areas have the xbow, AD, and teslas to protect them, skimming down the hp of the luring troops.

To break this CC luring, there are only two valid ways which I find is the most productive. One use a Lavaloon to bypass these twin towers (but it won't lure your CC loon so you can use that to your advantage). OR you can use hogs on that solo Archer Tower at the top (which I haven't tested if the hogs will go sideways towards the Mortar or the Cannon, so I put spring traps there). 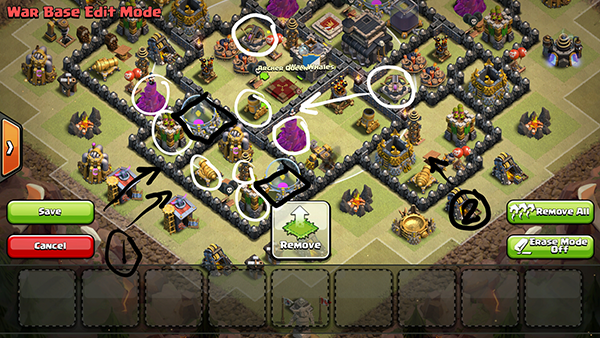 There are only two locations which is best to Queen Kill, the south west, and the east side of the base. In this image you can see that if they try to Queen Kill from the South-East, they will have to pass through the narrow 'section' of the bottom layer as well as the ArcherT/Elixir Storage. The moment they come too close, the x-bow and the surrounding defenses will be locked onto them.

an example of someone who recently tried to attempt Queen Kill my Queen from the East side: 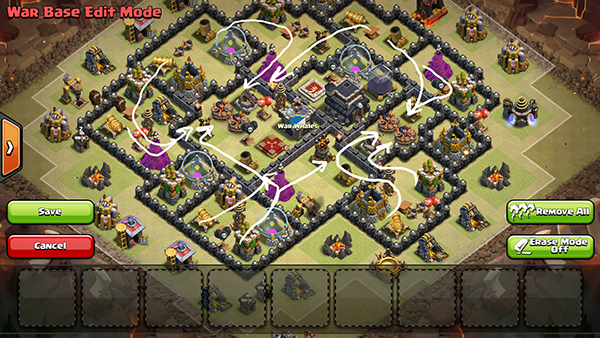 To stop hogs from trampling this base, you can see that there are many sections and many 'possibility' for there to be double giant bombs. It's a scary fact, and the double giant bomb locations I have placed have a clear "objective" path which will all lead towards double giant bomb locations. If you have read my CC Lure, you can see that the outside defenses almost form a 'circle' and will drag the hogs/ anything that targets it to go between the spring traps, lowering the count as well as the fact that the patching of the Hogs are predictable.

This is the full clip of the Queen Killing Loki, how he tried to use Lavaloon to beat my base. As you can see, after he destroyed the first top layer of defenses, the loons have to travel ALLL the way to the next defensive building. The fact that almost each defensive building in the core is more than 2 square spaces apart, makes it so that the travel time for the loons last even longer. Also the advantage of this base is that it is really wide, and spell coverage can't really cover all sections.

Now that you looked at my base, you can see that the defenses are so far out so "omgz, it's weak against Side Loonings, Holos! First, look at my explanation for when it comes to Hogs above^. Second to pick off each defensive building, you need to use 2 loons per defense, and have it go straight for that building. I have already countered the Hogs from taking more than 4 buildings out, and preventing them from truly damaging the internal sections.


[Look a the placement of my traps, the skeletons are airborne setting].


To counter the Side loonings, first I have made it so the 'junk buildings' are more further out. Second, my air traps placement are placed more closer to the outer rims of the base in order to cut down the loons quicker. Third, many of these sections have teslas in-between them, so even if the cannons/archer towers themselves gets destroyed, the teslas still have a virtual 0% chance of getting killed. Fourth, many of these buildings are still covered by Air Defenses, making it more difficult to loon (the key difference between my base and a holowiwi base). The Skeletons are set to air, because there is no point in them protecting against witches or distract the heroes for the extra second. They serve better as balloon poppers as well as surprise element and killing the pups.

Still needs a lot of tweaking and testing for trap placement though.

I don't really care about Gowiwi due to the fact that it's not a 3 starring attack, but nonetheless, I was fairly surprised when the Golems went sideways, and all the troops went into that Town Hall Section, the the mortars spray onto the wizards while the Wizard Towers shot any any that went sideways. The video explains it all. 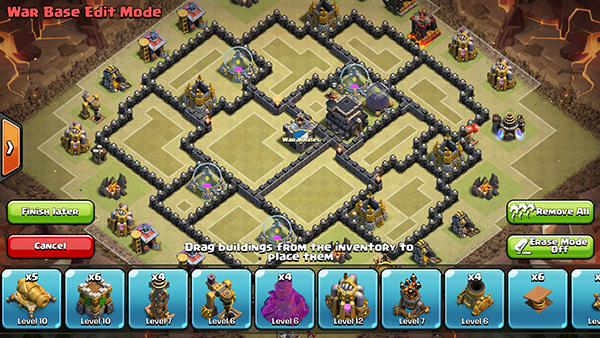 Finally, the storage location. It serves as a buffer between the twin-single defense towers and the core as well as it's placed at a well done location. Storages are the last beefy defenses that waste time and prevents the 3 star if you don't have enough clean up troops. Let's say for example all the defenses are destroyed and now your troops survived to start picking off the buildings. As you can see, the storages are fairly spread out, not within an wizard troop's range. If they want to shoot at the storages, they must break through the layers of walls to reach the next storages. For example, let's say you had your Queen at the Clan Castle building section. The Queen can easily reach that top elixir storage, that goal storage at the west, and the elixir storage at the south. But in order to reach that elixir storage that is located beside that bottom army camp, the queen has no way out but to shoot at a wall. If let's say you had wizards on the outside location, clearing up the junk. It cannot reach the storages that are located so deeply within, and if they want to hit the storages at the bottom, they'll have to break through walls. 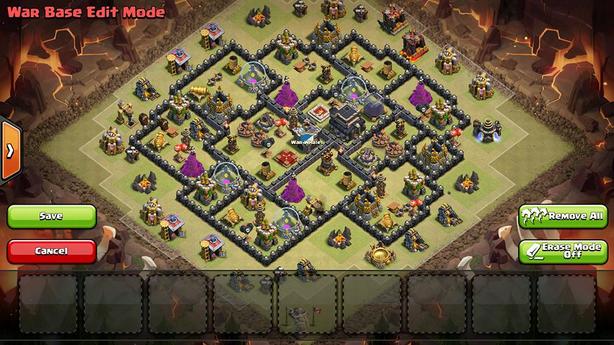 Version 1.0
Shifted some trap placement and Tesla can be moved from the bottom or the top.
Powered by