THIS IS MY FIRST GUIDE, AND IS REALLY OLD :P

Created and completed Feb 7, 2015.
Introduction:
Note: This guide isn't a gowipe/gowiwi guide.  This is how to view bases in layers.
Welcome to my Base Break Down - How to Scout a Base guide where I'll be teaching you how to section off, and break down a base in order to 3 star it.  Just a friendly reminder that as of now (Feb), I don't have as much experience with Lavaloon so I won't be covering that side of the story as much.   I'll be mostly teaching about how to think about looking at a base in layers, as well as sectioning off defenses.  As you get higher into the TH9 area,s Queen killing is also important but I will get to that topic in another guide so for now, this guide will be done to colour code and provide a visual representation of what I'm sure is pretty natural for those that know how to break down a base.  This guide will open up more areas of another guide that I will be posted [How to Side Loon/Hogging] and just provide one example as of now.  To learn more in-depth about side hogging/looning, please visit the guide once it's made. 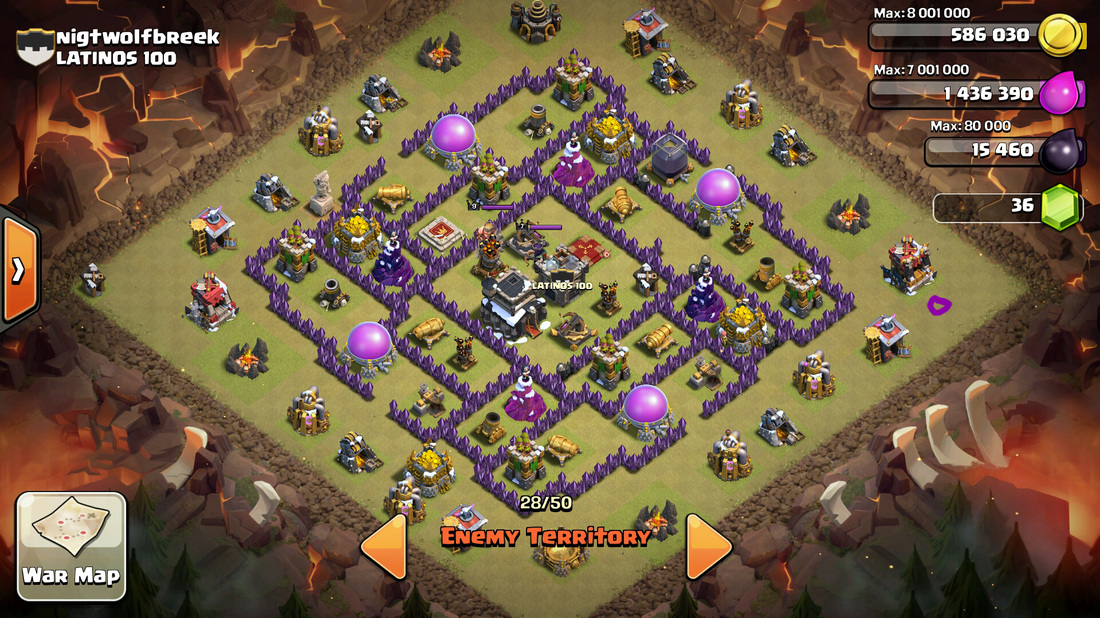 This guide will be using an example of what my thought process were for attacking Base #28 when I was with my old clan.  Even though I have failed this attack in reality (I didn't use jump spell since it was Lv1 and opt-ed for Rage WB which didn't break through to the core), the correct mindset and break down of this base is what I believe is the most valuable lesson for this Base Break Down Scouting guide, 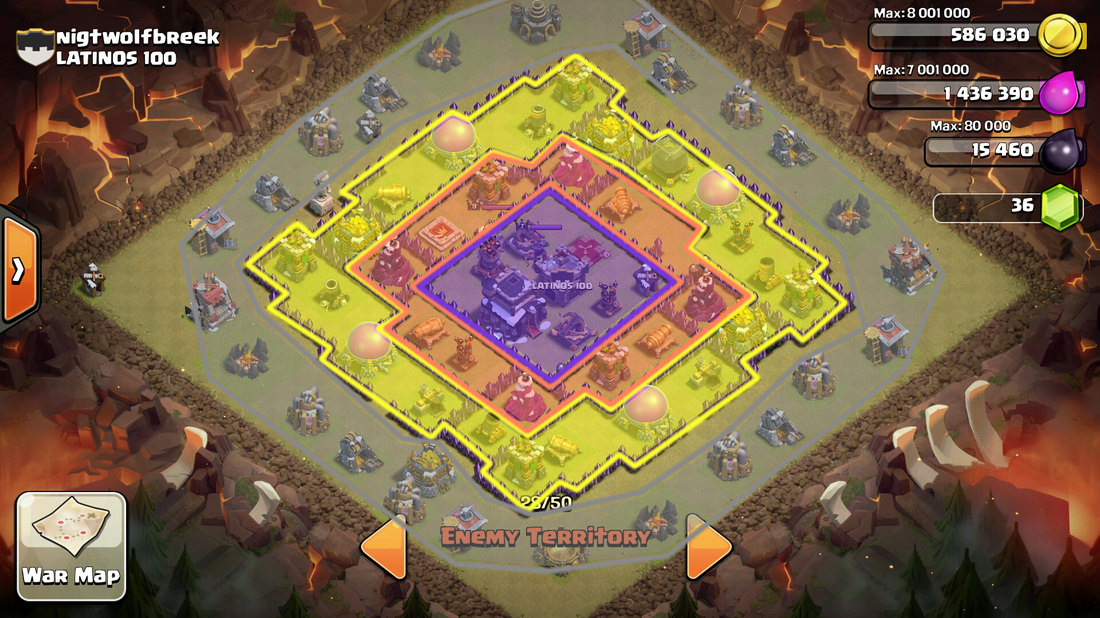 A-Layer:  The Outer ring, where mostly all the point defenses are.
B-Layer: The Secondary ring, behind the A-Layer
C-Layer: The Core Layer (Purple).  Where usually the Clan Castle and/or Town Hall is located.
.5 Layer:  It's the back side of the A-Layer.  Technically it's part of A, but it's not as when you attack it from one side, the opposite side then turns into a new layer to be addressed.
Junk Layer: J for junk (grey), as in the outside buildings.

When it comes to breaking down a base, there are two parts to it, which is what I term the [3.5J Scouting], which to be honest doesn't have to be as flashy and colour like what I have done above, but for the sake of teaching and visual representation, I have created this to show the process.  When it comes to the base, the most important part and the difference between a 2 star attack and a 3 star attack, is not the C-Layer (purple) where the core is, but rather it's the B layer, as well as the .5 Layer where you should be addressing.  So why is there 3.5 Layers but not 3 Layers? It's due to the fact that  once you deal with the front side of a circle, the back side of that circle automatically becomes a new Layer that you need to address. Let's say you break into that A-Layer Ring from one side, that means that your troops will go towards the middle, and then the other half of that Layer you broke, becomes a secondary force that hits on your troop.s  That's why it's technically not a 4th layer, but it's still another 'layer' that most people don't seem to realize and thus aren't able to 3 star a base.  More on that later.

When it comes to troops composition and troop preference, some layers and buildings/traps have a bigger impact to attacking than others.  For example, in my TH8 Dragon Guide in a Dragon attack, most likely you'd need to address the [Junk] Layer for Funneling, the Storages for time, the ADs as the main threat, as well as the Third AD for the second threat.  Storages and junk building for example, doesn't have as big of an impact compared to giant bomb placement.

I'll be skipping over why full hog rider composition and dragon wouldn't work on this base for some obvious reason.  Hogs have double giant bomb threats, and this base is wayyy to wide so hogs would have to spread.  Dragons have very low chance of 3 starring TH9s even with exposed ADs due to all the junk/storages as well as the 4 Seeking air mines.

When I was looking at this base, (I'm not a Lavaloon user so I have no clue on how to use it so don't ask me), I thought that a combination of Gowiwi or Gowiwipe as well as side hogs/loons would be best for this base.  Truthfully, that wasn't the best option to begin with as my heroes weren't as developed, but I hard to take on this base during the war. Continuing on, why would I need to side loons to begin with, why not just super rush this base with Gowipe and/or Gowiwi and hopefully everything breaks through the wall and 3 star the base?  it's due to the fact that defense buildings are in different layers, and what makes all bases unique is where are all the defenses are located that makes it hard to reach and break through.  By the time your troops break through the walls, your troops would have been picked off and it lowers your chance of success. 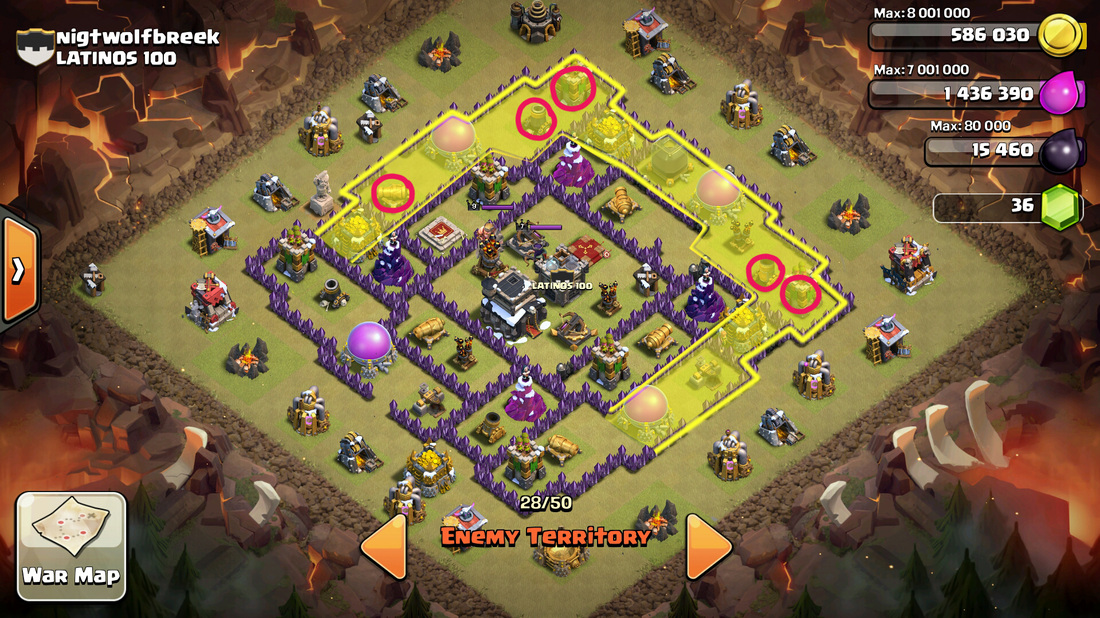 Now that I have given you the ability to see where the problem lies, now you'll need to learn the different ways of dealing with this situation. As of now, there are only a few options to deal with the remain base. Jump spell for your ground troops to get out of the core, Hog Rider or Loons.  I will show a visual example for Hogs and Loons since those are the main things that are the predominantly the most effective troops in taking out the side layers.   I will be covering this more in-depth within the [How to Side Loon/Hogs] Guide.

Back to this base, you can see that the main area of concern are at the corners which makes getting to them more easier.  Problem is that the corners are being protected by Wizard Towers, as well as the coverage by the Xbows.  So in order for the Wizard towers not to shoot down the side loons/side hogs, having your main troops attacking first as a distraction while they are at the core.

There are two main ways that I have thought of as solutions to finish off these buildings.

There are two plans which you can now do.
Main army from the south-west providing distraction and destroying air defense with the secondary troops to deal with .5 by::
Plan A)followed by Loons on the north (4-5), and hogs from the east (5)
Plan B)10-12 Hogs from the East, letting them survive and go north west.  There is a risk of them dying so an additional heal spell on them would be a good choice.
That concludes my visual step by step guide to show yo guys how to look at a base.  To be honest, against this specific example though, the risk factor and my choice of attack might not be the best way with dealing with this base, but I just want to demonstrate the importance of planning ahead and visually see what layers and defenses that are needed to be address in order to fully 3 star a base.


Thank you for reading and hopefully you have learn how to scout a base.
Powered by