Hi there base enthusiast, akiyume here :D
First off this will be a VERY Long Base Talk Series (wish it was a youtube video, but I don't do videos :P), so read this only if you have the time.

This is the second Kara War Base Talk Series, and the approach of this base is different than what I have done previously.  In my first explanation of Monica by Dreamz, I've explained how the finished product's positives, and approaches.  This time however I would like to explain an exchange of which how it is like to take a raw base design and turn it into a polished gem.  What I'm going to explain here is the process of which base designs have to think though and how much work and effort it takes to balance out the base compartment wise, and overall balance wise.  Some ideas I have suggested have been implemented, while some other ideas have been done on this base by Grames' own accordingly, so I'll indicate such changes, and everything described here is in linear fashion.

Of course the point of this particular Base Talk isn't to tell you "How epic this _____ base is", that would be appreciated, but the underlying messages such as trap balancing, 'scenario' patching, and as well as fixing any other things. This Base Talk will be more about the journey and how much tweaking a base needs to go balancing out the pro/cons of how attacks would come, and how much effort it takes for just to make a base correctly.

I'll try to explain the problems of the base itself, and then explain why this problem effects the overall balance of the whole base since the fact that compartments have their rules, and the overall bases also have their rules. Please enjoy the craft of base building.  Since this Base Talk is about the Journey, NOT the end result as much, I'll post the final product at the end.  I will also reference my TH9 War Base Considerations page.

I would like to thank VERY much and credits to Chief Grames for allowing me to post this freshly, and not allowing this base to be months old before approval, he as the creator and me as the consultant as we both worked on this base. Like I've explained before, no one wants to share good base designs since that means the base loses it's value, but I truly thank Grames for allowing me to publish this base fresh, along side the tweaks, as the learning value such as this is something that is only shared in the closed chat environment and dies with the base.  This is a good opportunity to educate and learn from so I would like to thank him on behalf of the public, and my readers :D.

P.S. What I've written below is me giving a full explanation of the details of the change.  Sometimes we just have to say a few words and us fellow base builders instantly understand, but this might not be the case for the public. So something that I wrote 4 paragraphs for below, can just be explained in 2 sentences between Base Builders because we understand the scenarios.  Hopefully with this Base Talk, it helps all those who inspire to be better base builders to understand the fundamentals of balance. 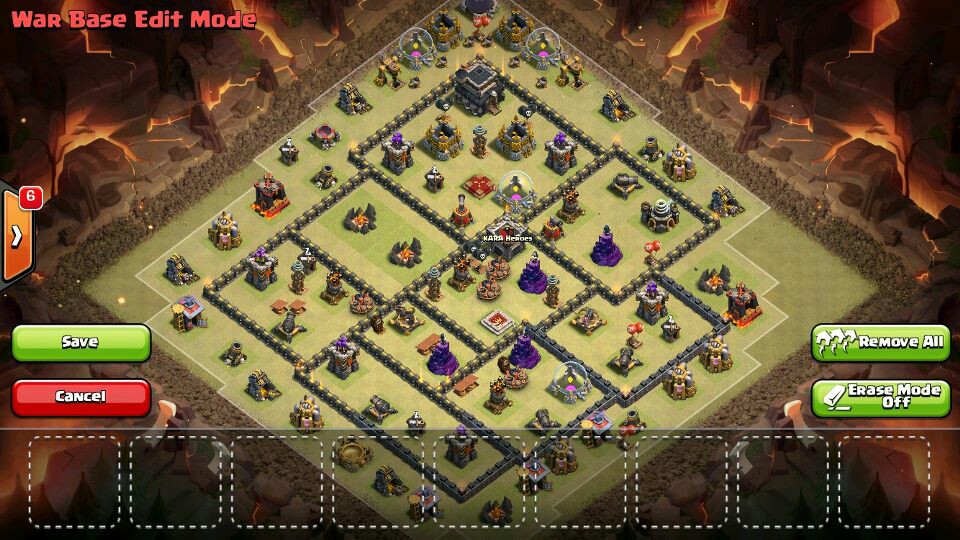 Here is the first draft presented to us in the Group, of his base design.  Looking at this base as it is, It's not bad at all from a normal perspective of base designing, traps are decently placed, the pathings work, as well as the fact that it looks balanced.

​ Here is where we as base builders think of when it comes to base attacking: 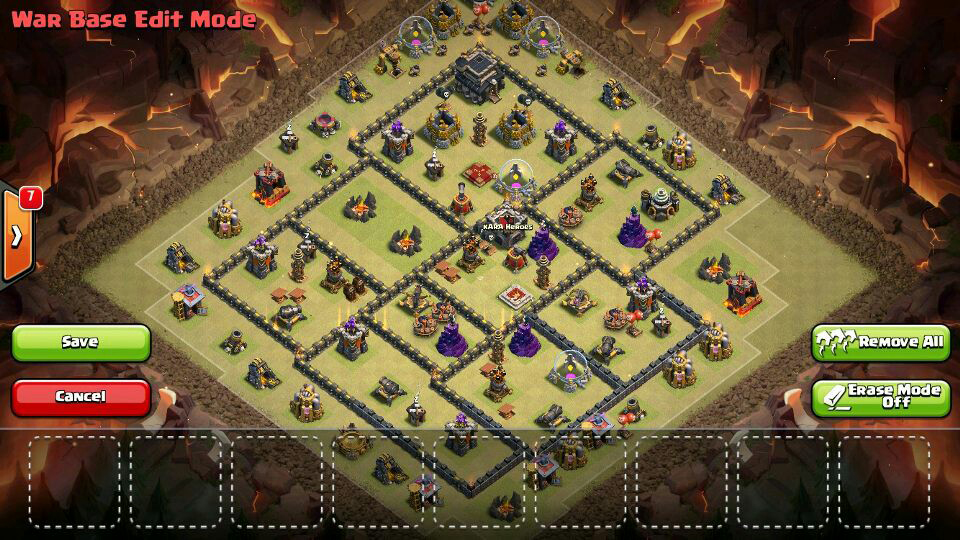 Looking at this image, you can see the fact that Gramer decided to move around the traps and a few defenses abit. The South side Air Defense has been fixed so that they can't Queen Walk from that location and get the AD>  The DGB at the core has now moved to the sides. While there is another set of DGB between the XBow/WizT. Overall compared to Version 1.0 of the base, this version has better working traps and in terms of the whole base, the trap location have covered the whole base, instead of allowing the right side to be empty.  The Central Core DGB is gone.  But looking at this base, this still didn't sit well with me as the traps aren't fully used properly.

The Central Springs would be too late and would serve no purpose. 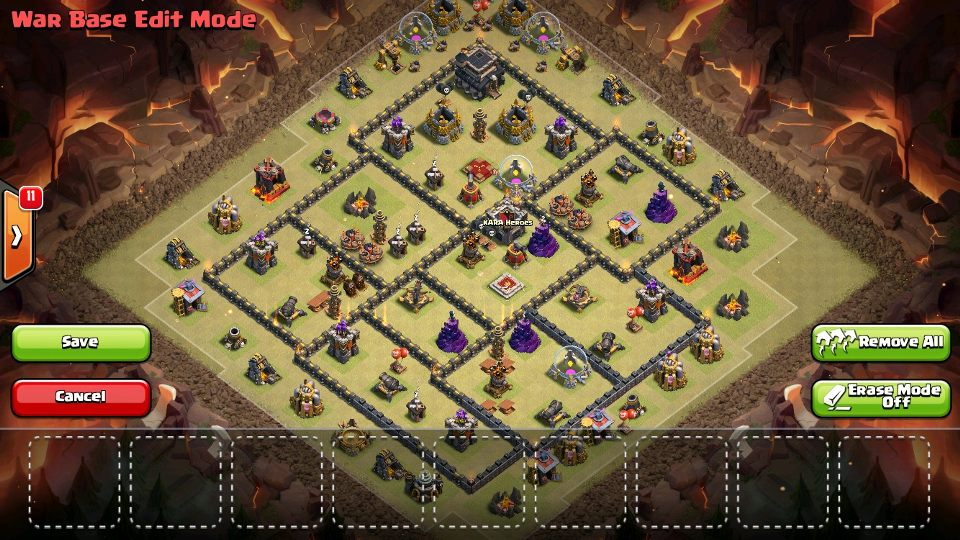 Looking at this newer version of the base, you can see the fact Grames did what I've suggested with the Tesla on the left side, but surprisingly, he decided to make that "empty coreish area" into the new DGB location. The good thing about this now is the fact that even if the springs don't work, the DGB will work.  If the DGB don't work, the Springs will work.  Either way, that is a really balanced location on the east side, feinting a DGB that they think would be beside the xbow and wizardT but it isn't.

Looking at the south side, you can see the fact that Grames opp-ed to use 4 of the spring traps at the south.  I think there might be some confusion when I showed him that image, but regardless, this set up is actually not bad at all tbh.  Since the south side has a very high presence and is almost the "direct opposite" of the Queen which almost makes it a very likely location for hogs to come to and from. The problem with such is the fact that now if you look at he compartment on the right side where the Xbow is, there is a really big location where it isn't protected by any traps.

Looking at the east side, Grames put the DGB at that location, which is fine tbh, but I am not liking that location of the DGB. Compare it to the mirror side where the Tesla and The DGB is, that side has a lower chance of ground troop coming in due to the fact that there is almost no value in that location, but at the east side, since there are 3 defenses, and 1 AD, that is already considered a 'medium' risk for which ground base troops can come through.  Looking at this base, You can see the fact that if they took out the core, and the east compartment.  The Xbow compartment is free range hogs, the south side compartment is actually abit iffy since the spring traps needs the hogs to come in from the south and the north, but if they already taken out the Archer Tower and the Cannon at the south, that is already 2 springs neutralized, leaving only one set of DGB, 2 springs, and 1 sorta springs left to work.  Problem with the left side DGB is the fact that is the "end game DGB" so if the hogs go through everything on the left side, then that last tesla might not be enough to defend against any loose troops. 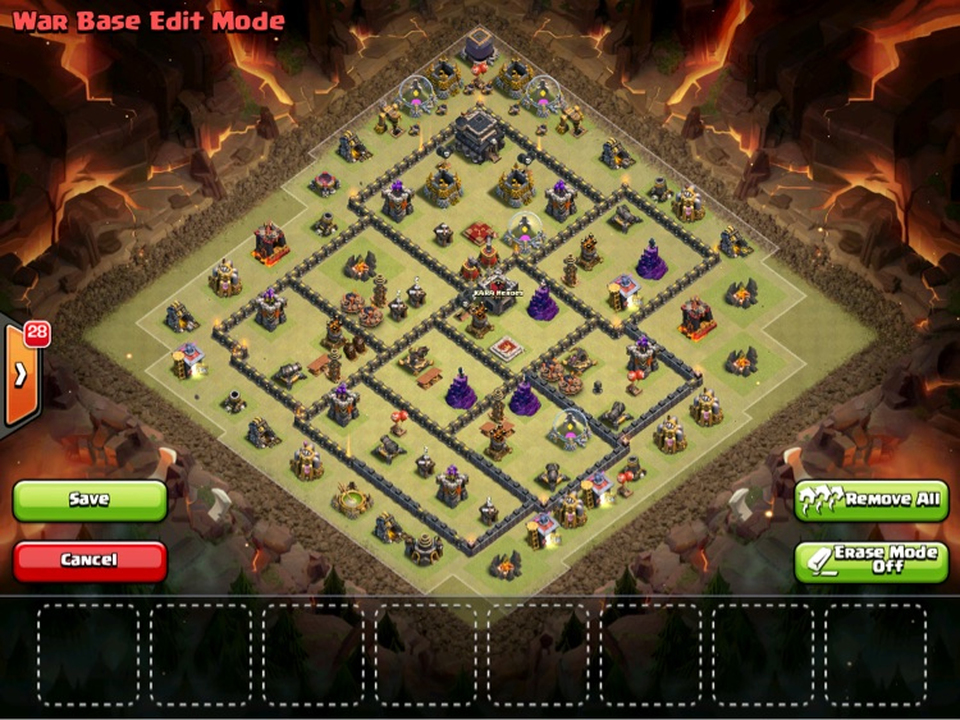 Now with Version 4 of the base, it's starting to look good, with the fact the fact that south side defenses are almost all covered by traps.

This was going to be almost close to the final version of the base, but there was some problems/tweaks needed, and some choices which Grames had done which 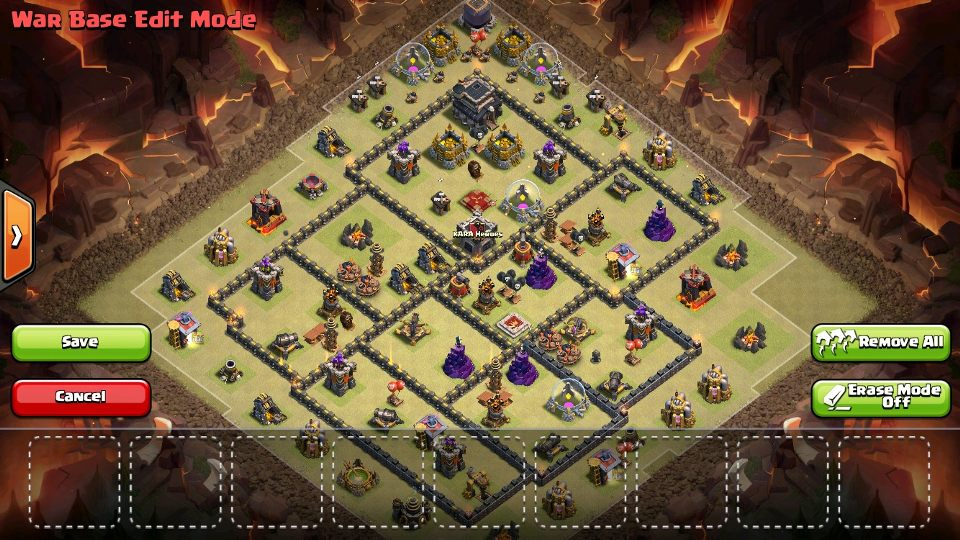 Here is the end result of all the tweaking of the base.  Th Clan castle is now supporting the Queen.  The traps are in positioning and things are overall move balanced and well done compared to the early version of the base.  There is still things that do not sit well with me though... (explained in Version 6) 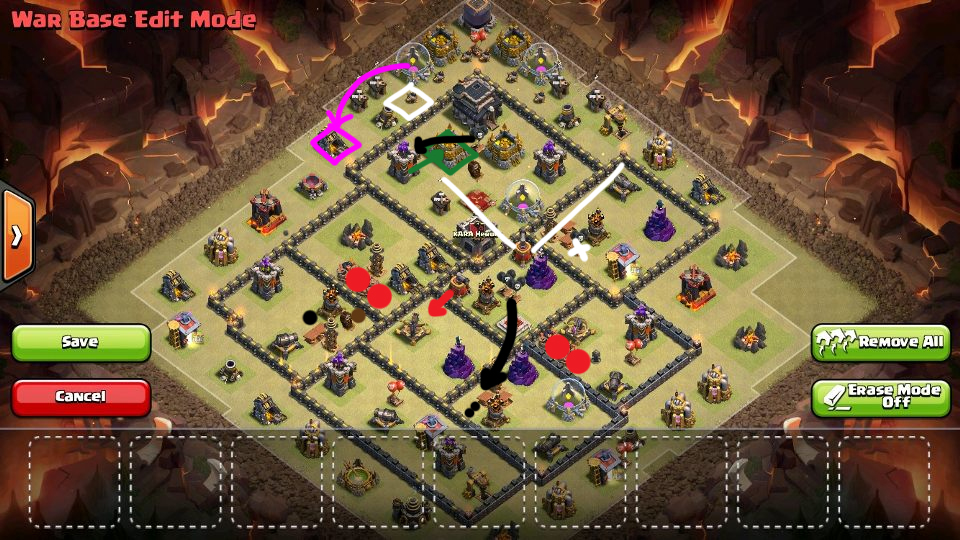 This is the post-Final Version of TJW Sprite which I have just thought of when it comes to this base as I am completing this article.

North Side;  I am still not liking the fact that there is that symmetrical Archer Tower, and there is nothing covering that north corner.  Exchanging the Archer Tower with that Gold Storage would be a better solution as well as the fact that moving that mortar up more, allows for the mortar to kill the wizards better.  Then you can move that east side mortar back south.  As you can see, the Air sweeper is more to the right side (to prevent suicide dragons), which is the reason why it's better to have the Seeking air mine moved to the left side.  The skeleton trap was there in order to distract the King, but I do not believe this is a good use of the skeleton trap, it is better off being pair with the other skeleton trap in order to chip away at hogs at the east side.

Air Sweeper: I have said that the central compartment is a really risky zone to be taken out, so having them both in that same compartment doesn't really sit well with me.  Moving it to that Xbow compartment (maybe not that location) but having it face west would make it alot better.

Seekings:  I disagree with the placement of the double seeking due to the fact that, like I've said, that middle compartment is too risky, and most of the Kill zone is located at the west and the south.  Moving the Seekings to the south is a better investment due to how much of a presence of being a kill zone there.

For the east side, you can see the fact that there is 8 point defenses on the Air Defense, and putting a Seeking there is a must.  Putting double seekings there though puts too much of a 'weight' on the left side, which is not a good idea, but that top right seeking would be better off placed at this location as a better balance, and if there is the air sweeper facing this direction, then it's almost the best location to set up.

The Double Giant Bombs:  I don't think he took my advice for the Double Giant Bombs, but moving them one space to the right (for both of them) allows for the cannon to Xbow to trigger both DGB, and if for example the Hogs come in from the Xbow to the north Tesla, then they will still both trigger the DGB, just in case they managed to kill the AD the same time as the Xbow.

For those that have read everything. I applaud for you.  Although this page is the most wordiest page of what I have written so far, I believe this is the most educated page I have to offer when it comes to teaching how much of the importance of traps and tesla location is when it comes to the base design.  Just one tile movement can completely change how the base defends, and how the interaction of the base works.  When it comes to all this information, it only took us two as base builders, just less than 500 words, maybe 100 texts back and forth, and that's how you polish a base.  Just this base alone would take a few hours, but the process of correcting this base, took us about 2-3 hours back and forth.  Every minor change, even by one tile can completely change the outcome of the base, which is what I'm trying to show, the dynamics of how much effort it takes to create these bases.  Creating is one part, but polishing it is another.